Assam on Sunday vowed to remain united in the time of crisis taking Chaolung Syukapha as a role model. This is what the message the Assam Day has conveyed to the people while the state was observing the Assam Day.

Assam Chief Minister Tarun Gogoi gave away the prestigious Sukapha Award to noted citizen and journalist Padma Borkotoky at a function at the Rabindra Bhawan in the evening.

The news of Assam Day celebration also are coming from almost all districts--upper and central Assam disticts and Guwahati. 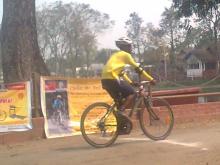 9 Mar 2013 - 5:21pm | SK Hasan
Cyclist of Nazia Anil Mahanta is attemping to enter Guinness World Record of short lapes 660 meter in cycling in 48 hours on the bank of the Barbaruah Tank, Nazira. This has started from last March 8...

25 Sep 2017 - 12:15pm | AT News
Defying a statewide protest, the Assam government on Monday arrested Akhil Gogoi under the National Security Act in connection to an old case pending against the peasant leader in Kaziranga...

23 Aug 2017 - 10:09pm | AT News
A group of traders in Nagaon assaulted a few surrendered ULFA rebels alleging extortion in the name of fund meant for the flood hit people triggering statewide reaction on Wednesday.  The...