As a results of encroachment on all the buffer zones around wildlife sanctuaries or reserve forests traditional elephant corridors have been closed forcing wild elephants to roam in the villages. Wild elephants have a very sharp memory and they follow the traditional corridors used by their forefathers. Wild elephants or other wild animals never understand or follow geographical boundaries.As a result of new constructions,tea gardens,army camps etc all the existing corridoors have been blocked which has caused the so called “Man-elephant conflict” in the state.Most of the PRF (Proposed Reserve Forests) namely-Kundarbil,Neewly, Bormukoli etc. have been totally encroached and area of Bornadi Wildlife Sanctuary, Khalingduar Reserve Forest,Bhairabkunda Reserve Forest etc.have been shrinking fast. Big tea gardens too have occupied huge forest lands.When villagers have been attacked or their crops or houses damaged people try to chase away elephants by any means. Tea gardens in the district too use electric fencing causing deaths of 6 wild elephants during this year. Most seriously,taking advantage of their like for salt,a few angry villagers used to dump urea mixed with pesticides causing deaths of 6 wild elephants this year. The deep trench like drains also sometimes served as death traps for new born babies.

Nature loving people,journalists,NGO members including WWF have expressed serious concern at the alarming instances of death of wild elephants. According to them forest department alone can never solve this burning problem unless local people are involved. They have suggested a few steps mentioned below for permanently solving this problem.

(b) Survey of the lands occupied by tea gardens so as to find out if forest lands have been encroached.

(c) Tea gardens must maintain a trained staff of their own to tackle the emergency situations.

(d) Tea gardens must maintain plantation free forest area inside their gardens so that herds of wild elephants could take rest undisturbed.

(e) Materials like salt,urea,pesticides etc must never be dumped anywhere.

(f) Construction of electric fencing by tea gardens or individuals must be stopped.

(g) A few interested local NGO must be motivated to help forest department to check poaching or illegal felling of trees. For this the members of NGO must be given proper training so that they understand wild animal behaviour and can create awareness among other villagers.

(h) Strict legal procedure must be taken against people found to be involved in killing of wild animals or felling of trees inside reserve forests.

(i) Records showed that most human causalities have been occurred in the tea garden area particularly in the evening or night time.People of such areas be properly advised to be alert and not to venture out in the evening or night. Wild elephants in a herd usually do not attack people.But loner elephants (who have been expelled from the herd) are very dangerous.People must avoid them at any cost.

(j) Mini forests in the form JFMC (Joint Forest Management Committee) must be formed on vacant lands in villages or Indo-Bhutan border where wild elephants could take temporary shelter.One such JFMC man made forest has been successfully established at Sapangaon village near Bhairabkunda. Here nearly 5000 bighas of barren sandy lands have been converted into a spectacular new forest. This JFMC has even been drawing tourists from other places of the state. 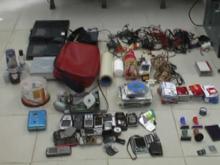 11 Apr 2012 - 1:19pm | Anup Biswas
In pursuance of the investigation on the 31st blast at Muolhoi, the Assam Riffle, Army Intelligence and Police arrested reportedly one Pauman Khongsai @ PK @ Freeman @ Iron Kuki from Khungsai...

31 Aug 2017 - 7:23pm | AT Kokrajhar Bureau
Many engineering students staged dharna at the Bineswar Brahma Engineering College premises in Kokrajhar on Thursday demanding affiliation under Guwahati University without any delay....