Wild elephants kill one at Paneri

In another tragic incident,one Joseph Munda (21) s/o late Batras Munda of village Nepalibasti near Nasonsali under Paneri Police Station has been killed by wild elephant at Gitibari area at 8.30 pm on December 2 taking death toll to 7 human beings this year only. According to information he along with other tried to chase away a herd of wild elephants damaging their paddy. It needs mention that so far 7 wild elephants and 7 people have lost their lives in the district till December this year as a result of Man-elephant conflict. It was not possible for three Kunki elephants employed by WWF Tezpur office to prevent hundreds of wild elephants coming down to plains in search of food.

Civil and forest officials rushed to the spot where they were confronted with peoples protest. Angry people blocked MB road at Paneri for a few hours at 11 am on November 3 demanding government action. Rihon Daimari,MLA, Udalguri; Bonjar Daimari, Dy. Speaker, BTC; Bankim Sarma,DFO,Dhansiri Forest Division,;DN Hazarika, Circle Officer, Harisinga Revenue Circle,Tangla visited Paneri along with other civil and forest officials to solve the conflict and to pacify angry villagers.A team headed by Circle Officer, Harisinga Revenue Circle also distributed rations to people whose crops and houses had been destroyed by wild elephants. Forest department also paid an amount to family as immediate relief. When contacted the DFO told this correspondent that the herd would not be able to move away in next 15 days with four new born babies. The herd would only move when the babies would be fit for long journey back to Bhutan hills

Media must be brave and selfless 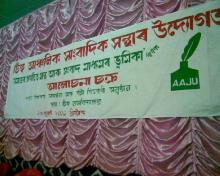 23 Jul 2009 - 7:58am | editor
Media and books should (must) play a vital role in guiding the society for sustained growth and intellectual upliftment. Both the mediums should also continue engaging the common people for a better...

15 Dec 2014 - 6:58pm | AT News
The House proceedings are unlikely to be seen on your television set in near future. The live coverage of an unruly scene on the floor might diminish the dignity of the House. This was said by none... 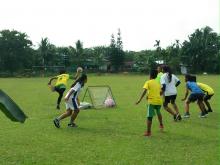 5 Sep 2017 - 8:22am | AT Kokrajhar Bureau
A state team coaching camp for competitors has been going on in full swing in Kokrajhar to participate in the ensuing 11st senior National Tchoukball championship-2017 to be held at Golaghat district...
Follow @Assam Times