The Congress Party general secretary, Rahul Gandhi, projected by his party as the future prime minister of the country, has proved to be failure for the post due to his shyness and escaping from sharing administrative responsibilities despite frequent appeals by the Prime Minister, Manmohan Singh. The young and old party leaders providing encouraging support in his favor also desired that he should come at the forefront now and make the party’s future strong enough.

Rahul Gandhi might be feeling uncomfortable assessing his own ability as during the earlier Assembly elections in Bihar, he was asked to campaign against the ruling National Democratic Alliance (NDA), but his party’s position was further reduced in the polls after his participation. He might have assessed his weaknesses, which the party leaders and workers failed to realize and understand.

Secondly, he was made the’ star campaigner’ in this year’s Uttar Pradesh (UP) Assembly elections. He tried his best to gather people in his public meetings, but failed to read the minds of the electorate. Through a few young party leaders and media persons he tried to reach and win the confidence of the electorate with help of grass root party workers, who were neglected so long.  The overall political situation prevailing in UP due to corruption and misrule of Bahujan Samajwadi Party (BSP) led by Mayawati, had gone for a total change and it was expected that the Congress party would come up in far better position, but that did not happen. On the other hand the Samajwadi Party led by Akhilesh Yadav got a better chance to attract the electorate and got unexpected absolute majority in the polls. The Congress party position did not improve.

Interestingly, in case of Rahul Gandhi, one thing was noticed that he did not put any effort to campaign for his party in Himachal Pradesh, where BJP government was defeated by his party. It can be called a miracle or a bad luck for Rahul, who did not try his luck to improve his ability in Himachal Pradesh.  If Rahul still finds him unable to change his pattern of leading the country’s oldest political party he would be missing the bus and his well wishers would have no way to save him from the fall. He has yet to learn the pattern of Indian politics and mend his way  for coming on the fore front.

Assam second in offence against state

21 Aug 2015 - 8:52am | AT News
Assam accounts for 11 per cent of cases of offences against the state, the second highest in the country.The National Crime Record Bureau data suggests that Assam stands next to Kerala with 72 cases... 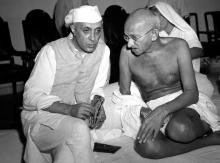 3 Jun 2008 - 1:03am | editor
Forty-four years ago on May 27 the first Prime Minister of India died in harness. About Pandit Jawaharlal Nehru, Maulana Abul Kalam Azad wrote in his autobiography: ‘Jawaharlal asked me in...