Lions Club of Nagaon Greater organised a mass-marriage ceremony on March 17 at Jain Bhawan, Nagaon in which 25 couples tied knots into wedlock. This is the third consecutive year in which the organisation has organised the event.

The couples which were mainly from the tea tribe were from the far flung areas of the district and selected after a long drawn process. The event was conducted with traditional rituals which was followed by a feast in which over 400 people. Program Chairman Lion Lalit Kothari informed that all the 25 couples were provided with a set of house hold utilies such as bed, mattres, utensil, cloth, artificial jewellary, cosmetics etc. to start their new life.

The programme drew accolades from all walks of life. Club's women wing Lioness Club of Nagaon Greater also played an instrumental role in the success of the programme.

30 Aug 2014 - 12:46pm | AT News
Sensation prevails a day after an irate mob lynched two rape and murder accused in Dibrugarh district on Saturday. The bizarre incident took place at a tea garden in the Chabua area where a group of... 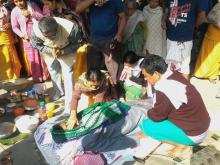