Sujit Das is an Indian Painter whose chosen field of work took him to the Guinness Book of World Records. Born on December 25, 1980 to Sri Kamakhya Chandra Das and Khama Das, in Bengalipatty, Nagaon, Assam, he did his schooling from Bengali Boys Primary School, Nagaon under the guidance of noted artist Gugu Pranab Baruah. He received a Diploma in Fine Arts from Ruprang School of Drawing & Painting in Nagaon. His works were exhibited in several national and international platforms. In 2002, he received the Lalit Kala Parishad Award from Lalit Kala Parishad, Vishakhapatnam. In 2009, he was awarded with the National Award for the Best Young Artist at Amritsar (Punjab) under the Ministry of Youth Affairs & Sports, Government of India. He was the first from North East to have received the award. He was also awarded with the Everest Award by the Government of Nepal for his outstanding Achievement in the field of fine arts.

He completed his HSLC from Nagaon Bengali Higher Secondary School and went to GNDG Commerce College, Nagaon. Then got a diploma as Visharad & Kalaratna in Visual Arts from All India Music and Cultural Society,Kolkata. He also has a diploma in Electronic Engineering from Assam Institute of Electronics and a Bachelor’s Degree in Mass Communications. 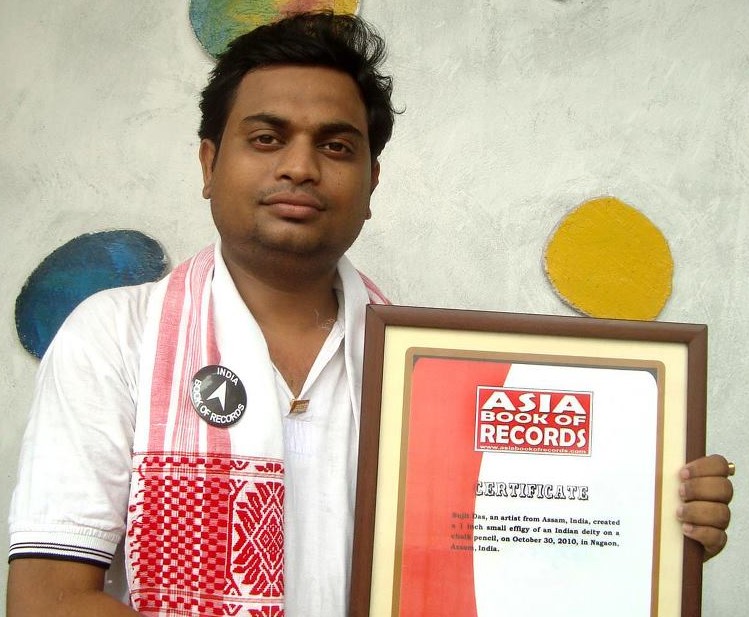 In 2010, he created an one inch Durga idol on a piece of chalk aiming to enter into the Guinness Book. The idol has been recognized as the ‘World’s Smallest Durga Idol’ by as many as 10 national and international record book organizations. On 20th May 2012, he painted the smallest 3D Painting using water colour, measuring 4cm in length and 3.5 cm in width. On 19th June, 2012 with the World’s Largest Paint Brush that measured 28ft in length, 4.4ft in breadth and weighed 22kgs, Sujit successfully painted the portraits of Mahatma Gandhi, Sahid Bhagat Singh and Bishna Prasad Rabha on canvas.

London World Records University in a ceremony at Indira Gandhi Kala Kendra, New Delhi on 27th of February 2013 presented him an Honorary Doctoral Degree for his outstanding feats.

9 May 2013 - 10:28pm | AT News
Maize farmers in Bongaigaon district threatened to commit suicide in protest against the spurious quality of maize seeds distributed to them by the state government.The maize plants bloomed fully in...

17 Jan 2014 - 9:08pm | AT News
Chief Minister Tarun Gogoi’s son Gaurav Gogoi wants to contest the Lok Sabha polls from Kaliabor constituency instead of the sitting MP Deep Gogoi in the upcoming general election.Samir Gogoi is a...

Mooshahary to fight from Kokrajhar

14 Jan 2014 - 11:23pm | AT News
After months of will-he-won’t-he, Ranjeet Sekhar Mooshahary finally announced that he would contest the upcoming Lok Sabbha polls.Talking to reporters in Kokrajhar on Tuesday, the former Meghalaya...