Despite seeing development in terms of infrastructure and vehicles in the oil rich districts of Sibsagar, Dibrugarh and Tinsukia in neighbouring Assam, the villagers of Nagaland seem unmoved over the lack of development in their own state.

The Wokha district in Nagaland, is a oil rich district but however development till date couldn’t actually take place as a result of public protest and also protests by different organizations.

“Even the person beneath whose land the oil or any other natural resource is found doesn’t have the sole right or authority over the resource, but will rest on the entire community,” said Medhi.

Several senior residents of the Wokha district, when approached however said that they are happy with things as it is, and added that they are not much pained in seeing developments in the oil rich areas  in the neighbouring state.

“There has been some development in areas such as Sibsagar in Assam, but it is not at all uniform and not decentralized. Only some selective people have gained, and most poor people basically the farmers, have suffered to a great extent,” said Nyanbemo Ngullie, a senior leader of the Lotha tribe, which is a strong force in Wokha where the oil fields are located.

The Lotha leader, who had once championed the fight against oil giants ONGC, said that he and everyone at Wokha is voicing for sustainable development to bring benefits for everyone.

A study carried out under a media fellowship offered by the National Foundation for India (NFI) shows that though the Wokha district in Nagaland, and the Sibsagar, Dibrugarh and Tinsukia districts in Assam are oil rich, the people are a whole are yet to benefit from the natural resources. 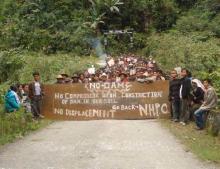 24 Sep 2014 - 4:09pm | Chandan Kumar Duarah
The Central government has decided to build to 3000 MW Dibang Hydroelectric Project in Arunachal Pradesh without any public consultation and study about probable impact and precaution measure to be...

23 May 2008 - 1:15am | editor
Bloomington: Two Guwahati based scribes have arrived at Bloomington for undertaking a sensitizing program at Indiana University on HIV/AIDS issues. More over they will be provided space for...

5 Nov 2013 - 2:25pm | Subhamoy Bhattacharjee
Over a month since the migratory Amur falcons’ arrival in Nagaland, not a single bird has been killed in their roosting site in Doyang Reservoir, reports the Amur Falcon Protection Squad (AFPS) – a...
Follow @Assam Times