Meet to deal with fish pricing

A high level meeting in Dispur on Monday is set to discuss a slew of measures to effectively deal with the anomalies in eggs, fish and chicken pricing.

To be presided over by Chief secretary PP Verma, the meeting would be attended by the finance secretary HS Das who unearthed the anomalies. Das in his letter to Verma revealed that fish, eggs procured in water price with the help of the government are being sold in exorbitant prices in the markets. He said that an egg is procured for Rs 1.04 is sold for Rs 4.50 in the open market. Same it is in the case of the Andhra Pradesh fish which is available for Rs 20 per kg to be sold at Rs 200 in the market.

16 Aug 2013 - 9:13pm | SK Hasan
Along with the rest of the country the 67th Independence Day was observed peacefully at Nazira under the aegis of Nazira civil administration with a day-long programme. The ceremonial function was...

HPC Panchgram on the brink of closure

7 Sep 2008 - 4:55am | Daya Nath Singh
Hindustan Paper Corporation (HPC), Cachar unit, situated at Panchgram near Badarpur is in dire strait and likely to be closed very soon. The Board of Directors of the company and the nominated... 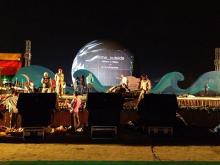 31 Mar 2017 - 2:21pm | Bobbeta Gogoi
An improved weather has given Guwahati some sort of respite as the premier northern eastern city is opening the country’s largest river festival on Friday.A bedecked city beckons thousands of people...