Sunita and Bhuyan and her mother Minoti Bhuyan performed at the 11th death anniversayr of poet Nabakanta Baruah at Rabindra Bhawan Guwahati on July 14. The eventw as organsied by nabakanta Baruah Foundation. 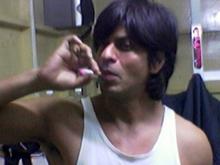 Right to life should overrule creative liberties of Shahrukh Khan

7 Feb 2008 - 6:48am | bobbyramakant
Indian film-star Shahrukh Khan's explanation of his right to 'creative liberties' to justify portrayal of tobacco use in Indian cinema has sparked a huge row with India's health minister Dr Anbumani...

27 May 2015 - 4:49pm | AT News
Assam police have gathered evidence that arms for the northeastern region come from Myanmar. According to DGP Khagen Sarma, the sea routes are no longer valid for the north east militants to...