The EEE & ECE faculty members are invited to attend 10-day ISTE (Indian Society for Technical Education) Workshop on “Signals and Systems” funded by MHRD, Govt. of India, starting from 2nd  January 2014 to 12th January 2014. The workshop will be conducted by IIT Kharagpur at Don Bosco College of Engineering & Technology, Guwahati through National Mission on Education through ICT (Online video conferencing. Only 100 seats are available for this workshop.

No registration fee is charged from the participants of colleges / universities across north-east inviting participation for our upcoming ISTE-workshop.

However, it is mandatory that the participant should submit a scanned copy of permission letter in prescribed format from the Principal/HOD of his/her institute mentioning that he/she is an employee of the institute and has been permitted to attend the workshop. The letter should be on the letter head of the institute, and prescribed format can be downloaded from the website http://www.nmeict.iitkgp.ernet.in

The next 10-day workshop is planned during  2 -12 January 2014 on "Signals and Systems." IIT Kharagpur plans to conduct six such 10-day workshops during 2013-2015. In addition, IIT Kharagpur is providing help and assistance to Engineering colleges in Eastern and North-eastern India to set up more remote centres and encourage greater participation. 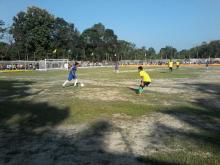 Where locals fear to tread

9 Jul 2016 - 4:06pm | AT News
A nondescript hamlet in Morigaon district of Assam, of late, seems to have taken the centrestage of attraction. But only for wrong reasons. Known as Hatimuria under Mayong block in the district, the...

23 Jul 2015 - 9:15am | Abdul Gani
The Assam State Election Commission vide a Notification issued on Wednesday has imposed model code of conduct in connection with the second election to the Tiwa Autonomous Council which is going to...