Hills State Democratic Party(HSDP) leaders: Depolal Hojai(Ex-CEM), Suraj Naiding(President), Jayanta Nunisa(Secretary) along with other party activists pose for photo during the 12-hour Road Blockade Programme against non-completion of the renovation/repair work of D.D Road (between Lower Haflong to Diyungbra) and Parsi Garampani Road(between Umrangso 13 kilo and Diyungbra) on Thursday in Haflong.

The party also made it clear that if the Govt. fails to complete the repair work of the two roads immediately, they will further organise agitation programme such as 3-day Road Blockade in the near future. 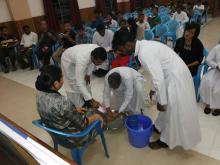 24 Mar 2016 - 11:27pm | CM Paul
In an unprecedented ceremony recalling the historic event in the life of Jesus of Nazareth when he washed the feet of his disciples at the Last Supper prior to his crucifixion, the Vice-Chancellor of...

12 Aug 2015 - 10:48pm | Hantigiri Narzary
Hundreds of activists and students from the north east  staged dharna in front of Assam Bhawan in New Delhi on Wednesday in protest against the recent gangrape of a woman in Kokrajhar district....