Not worried about Modi: CM

Chief Minister Tarun Gogoi said that he had nothing to be worried about Narendra Modi who is holding a huge rally in Guwahati on Saturday.

Talking to reporters in Sivasagar in the sidelines of a function, Gogoi said that the huge rally in Khanapara will hardly help BJP woo the voters.

He said that the people are aware of the country’s political scenario and UPA performance. “Yes, let them hold the huge rally in Guwahati. Let them pull the crowd. But the people will vote us,” said the Chief Minister.

9 Mar 2016 - 7:13pm | Mowsam Hazarika
Women's Day was celebrated by Society and Heallth in collaboration with sSTEP at Guwahati on THursday. An octogenerian street dweller of Panbazar Sukleswar Mandir inaugurated the...

Akhil to be produced in court

7 Mar 2014 - 8:40am | AT News
Police are all set to produce Akhil Gogoi seeking more remand in a string of fresh cases pending against the KMSS president.Sources told Assam Times that Gogoi along with two others would be produce... 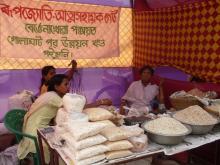 14 Apr 2011 - 2:04am | editor
The District Rural Development Agency (DRDA) Golaghat organized a self help group mela at the New Jail Market, Golaghat. As many as 30 nos. of SHGs of different development blocks of the district...
Follow @Assam Times