The BJP panel set up to probe the voting anomaly in the Rajya Sabha poll is all set to submit its report on Friday.

Senior BJP leaders told Assam Times that the report would be prepared before the state party president for action against the legislator who intentionally got his vote cancelled.

Led by senior leader Mison Ranjan Das, the three member panel grilled all the five legislators to fine out the truth behind the allegations. They include Parasanta Phukan, Ranjit Dutta, Jadav Deka, Manoranjan Das and Dilip Moran.

12 Sep 2015 - 8:13am | AT News
KMSS leader Akhil Gogoi is ailing. He was rushed to the Guwahati Medical College Hospital on Friday following complaints of uneasiness. Doctors attending on his said that his condition has improved. 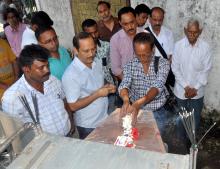 10 Jun 2016 - 10:40pm | AT News
Journalist Nand Kishor Gupta (46), breathed his last yesterday in Mumbai was laid to rest today (10 June) after necessary rituals. Mortal remains of Gupta were taken to Guwahati by a morning flight...

28 Jun 2014 - 7:57am | AT News
The overall situation in Guwahati seems to have marginally improved on Saturday a day after many parts of the city was caught in the massive waterlogging, electrocution and landslides that claimed...