It was really a mockery of foundation stone laying ceremony by the Chief Minister of Assam one day ahead of announcement of Lok Sabha polls in the country by the Election Commission of India on 5th March 2014. As soon as on March 4, the news spread that the election dates would be announced on 5th March, Mr. S. Vishwanathan, Commissioner, Guwahati Municipal Corporation (GMC), Mayor, Abir Patra of GMC along with other GMC officials approached the office bearers of the Ulubari Bazar Committee with information that the foundation stone laying ceremony would be done by the Chief Minister Tarun Gogoi, the following day i.e. on 5th March at 11 a.m. They ordered dismantling of about two dozens of stalls in the market to provide space to make stage for the programme. The traders of the market were informed that they would be getting a good building for their shops very soon. They had to lose their shops and daily business for three days consequently..

The traders’ committee, namely, Ulubari Bazar Committee, a registered NGO, demanding better environment for business since its inception in 1971, was assured several times about getting super market in the year 1980 with fund provided by Hudco and then again in the year 2007, it was proposed to be constructed with the funds available from Asian Development Bank (ADB), but all such promises proved an illusion. This time also the traders were not sure, but the promptness of the authorities looking into the future prospects of the ruling party proved to be a ‘surprise’. It was announced that the CM would lay the foundation stone at 11 a.m. on 5th March. In the Evening of March 4, the news came in that the EC was going to announce election dates at 10.30 a.m. on 5th March. The situation was embarrassing for the authorities, but they conveniently managed to advance the programme for 9.30 a.m.

It was a surprise for the traders and local people when they heard that the foundation stones for the four (4) municipal markets were to be laid at the same location of Ulubari Bazar, whereas the name of Ulubari Market was missing in the list. The GMC markets for whom the ceremony was held were Ganeshguri, Fatasheel, Rup Nagar and Pub Sarania markets. The pictures of all the four ‘future markets’ were displayed. Except the Ganeshguri market other markets were not informed about the timings and the site, where the foundation stone of their markets were to be held.

Interestingly, no stone was used in the ‘foundation stone’ laying ceremony. The thick plastic boards were used in lieu of marble stones. The banner put on the function displayed the names of dignitaries including the PWD minister, who could not be seen at the stage. Before the local people could know about the official plans and fate of those markets the ceremony was over by 10 a.m. and people could know about the programme only after looking the traffic jams on the roads. Was it not a mockery, people have to decide themselves ? 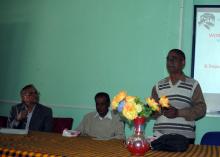 18 Mar 2014 - 7:32pm | AT News
BJP leader Chandra Mohan Patowary lambasted AGP leadership for avoiding a pact between the parties to corner Congress in the upcoming Lok Sabha polls.Addressing a press conference in Guwahati on his... 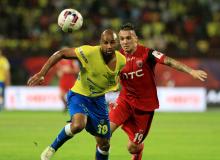 6 Oct 2015 - 9:10pm | AT New Delhi
The Kerala Blasters FC down the North East United FC 3-1 goals after a thrilling 96 minutes match in the ISL Season II match in Kochi on Tuesday. Nicholas Velaz opened the account for the...