AICC poll panel is holding a close door meeting in New Delhi on Thursday to clear the list of candidates for the upcoming Lok Sabha polls.

Earlier, the screening committee has prepared the list and sent to the party’s poll panel for approval.

Chief Minister Tarun Gogoi is leaving for the capital on Thursday to attend the meeting.

The list is expected to be announced on Monday or Tuesday. 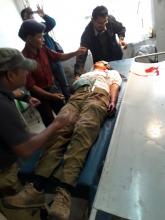 14 Jan 2016 - 12:16pm | Hantigiri Narzary
A forest official was seriously injured when he was attacked by wild bear at Alu farm in Halugaon area of Kokrajhar district. According to forest official, Nilmoni Brahma, a staff of Amguri forest...

18 Mar 2014 - 11:14am | AT News
Its yet another blow for AIUDF. Dr Pervez Ali Ahmed has joined TMC to contest from Barpeta. That too a day after the AUIDF announced his name as a candidate from Silchar.According to information,...

30 Oct 2014 - 7:32pm | AT News
Six years have passed since the gory serial blast on October 30 claimed at least 100 people in three places. But the memories are still fresh in the minds. Guwahatians on Thursday evening thronged...