The death of a girl from Manipur inside a hotel room seems to have mired in utter mystery in Guwahati on Thursday.

The incident took place at the Hotel Welcome in the Ulubari area where the girl from the Ukhrul district in the north eastern state has been lodging with a boy whom she falsely identified as her brother.

But the boy who in fact, hails from Udalguri informed the hotel authorities that the girl was found hanging.

The body was sent for post mortem. But the reason of the suicide has yet to be ascertained.

2 May 2016 - 8:15pm | AT Kokrajhar Bureau
The All Bodo Students Union (ABSU) and United People's Party (UPP) submitted memorandum in separate to the deputy commissioner, Kokrajhar in protest against prevailing situation arisen in the... 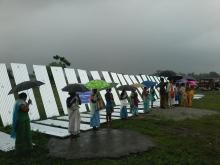 25 Jun 2016 - 11:13am | AT Kokrajhar Bureau
Altogether 35 BPL widows of greater Karigaon area were given away income generating livestock cow and CIC sheet with coinciding celebration of Interntaional Widow Day at Moslapara village in...

13 Jul 2014 - 8:59am | AT News
Angry minority organizations in BTAD areas have blamed dissidence within the Congress legislative body for the Baksa incident where four lemon traders were believed to have been killed on...