No to unprotected water source

Good news for the people of Nagaon. Potable water from unprotected source would soon be a thing of the past. Courtesy Islamic Relief Worldwide.

The organization’s India Mission head Akmal Shareef inaugurated ring wells in Khagorijan gram panchayat recently (on February 26). During his interaction with the villagers, Shareef assured the people of more support to improve the existing water and sanitation condition.

Islamic Relief Worldwide is working in 40 countries across the world. It is in partnership with Anfar Foundation, a Hojai based humanitarian organization, is implementing the Rural Water Supply and Sanitation project in Khagorijan Gram Panchayat.

Under the project, the construction of 25 ring wells and 140 units of low cost sanitary latrines are going on. The project will cover 2200 household in 10 wards.

The villagers are forced to drink water from unprotected sources. During winter when most of the water bodies dried up, women have to walk miles or get up in wee hours to collect water.

The crisis is so intense that mid day meals are not cooked in many anganwadi centers.  Skin and water borne diseases are very common especially among children. 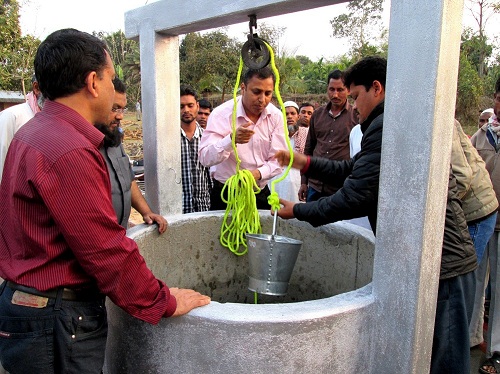 7 Apr 2012 - 3:16am | editor
Heartcare at affordable cost! courtesy Ayursundra. The Guwahati-based healthcare provider group is set to spread the concept of specialised heart care units in hospitals across the state. This...

31 Dec 2011 - 4:30pm | editor
The anti dam protest received yet another boost when hundreds of AASU activists started a three day long blockade at Gerukamukh to disrupt the supplies of machinaries to the NHPC-owned big dams...