Hundreds of students staged dharna in front of the state secondary education board office in Guwahati opposing the move to dilute six subjects from the syllabus.

Led by Assam Sanskrit Students Union, the protestors alleged a nefarious conspiracy to dilute the vital and relevant subjects from the HSLC syllabus.

Protesters told Assam Times that earlier they wanted discussion with the SEBA chairman and secretary. But they could not find time to discuss the serious issue forcing them to stage dharna on Monday.

YWOA for renewal of peace process

30 Jun 2007 - 9:07am | Sandeeps
Our Correspondent Guwahati :The Youth Welfare Organisation, Assam (YWOA) has appealed to Assam Government to take positive step for renewal of the peace process with the banned ULFA to bring the... 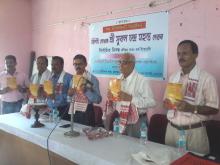 One dies of electrocution in Tangla

20 Sep 2017 - 8:06am | Shajid Khan
The electricity negligence has taken thr life of yet another person triggering anger and protest across the state on Tuesday. The incident took place at Samokuchi village in Tangla where the victim...