Normal life in the state has come to a grinding halt across the state due to the 12-hour Assam bandh on Tuesday. Called by the United Liberation Front of Asom, the bandh is by and large peaceful. There is no report of any incidents during this period. Schools, colleges, offices, business, financial and establishments are remaining closed. All sorts vehicles are remaining off from the streets. The city is remaining closed and calm. The bandh began at 5-30 in the morning to end at 5-30 in the evening. However, train and flight services are operating normally during the bandh hours. The bandh however, had no impact in North Cachar and Karbi Anglong districts. The ULFA called the bandh demanding immediate release of PCG member and MASS leader Lachit Bordoloi and also to stop killing of innocent people in the name of encounter.

17 May 2011 - 11:19am | Abdul Gani
Gauhati Cine Club paid a rich tribute to the first filmmaker of the state Jyoti Prasad Agarwala and vowed to help in creating a culture of watching films to motivate youths towards cinema. “...

1 Jun 2014 - 8:07am | Nababuddin Ahmed
A 40 member team of Boys and Girls of Assam Rowing Team is participating in the 17th Sub-Junion National and 18 Challenger Sprint National Rowing Championship which begins in Kolkata on Sunday.... 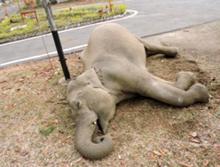 29 Mar 2015 - 10:41pm | AT News
The death of a female elephant left the animal lovers no less shock in Guwahati on Sunday.The incident took place in the army cantonment area in Narengi where the animal was believed to have died in...
Follow @Assam Times