A crucial meeting of BPF and AGP leadership with Amit Shah is clearing the decks for the expansion of Sarbananda Sonowal cabinet slated for April 15.

Senior BJP leader Himanta Biswa Sarma along with AGP president Atul Bora, his BPF counterpart Hagrama Mohilary is meeting the BJP president in New Delhi on Monday where the entire process would be finalized.

Sources told www.Assam Times that Bongaigaon legislator Phani Bhushan Chaudhury is likely to be inducted in the cabinet from AGP. Both AGP and BPF will have one each in the cabinet while BJP will have six new faces in the expanded cabinet.

The coalition partners AGP and BPF have been demanding two more berths. But the BJP leadership want one each from the regional parties.

24 Sep 2010 - 3:40am | editor
Caught in an immense pressure from Assam, the Nagaland government on Thursday has suspended an armed personnel citing his involvement in the recent Golaghat incident. According to information from... 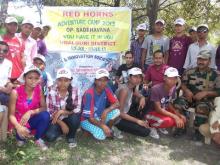 23 Jul 2013 - 8:29am | Jayanta Kumar Das
A four days summer adventure camp which was organized by Vision and Innovation Society,Tangla in association with Mighty Fine Gunners of Red Horns Division concluded at Tangla on July 18. The...

10 Sep 2015 - 8:26am | AT News
Amid an aroused brouhaha over the government’s move to hand over 69 oil wells to private companies in Assam, a section of economists have thrown their weights behind the decision. Talking to Assam...