There seems to be no administration (administrative, municipal or police) worth the name that is visibly doing anything to salvage the situation. Garages apparently operate on roads and sidewalks. Toxic and hazardous wastes are found littered on the roads till noon questioning the role of the city municipality's waste management system. Public buses pull up at non-designated stops forcing the following traffic to undue jerky halts.

The public too are complete misfits for a city life. They harbor the view that sewerages are scientifically engineered for solid and domestic waste management. Pushing boundary walls onto the roads are just normal so is spitting after consuming tobacco and related items on everything except on themselves. They exhibit extreme selfishness while driving, walking, shopping and apparently everywhere. They flout all laid norms by constructing their plinth always higher than that of their neighbors. Guwahatians appear to have lived in the caves for 1000 years, in the jungles for another 1000 years, in the villages for 1000 years before finally finding themselves in a city.

A face-lift to all these and more can work wonders.  A relief plan is pertinent for a city not only suffering from the lack of basic amenities and ethics but gradually suffocating and almost dying. Mentioned under a few steps in the direction.

1. Reclaiming 100 metres of the River Brahmaputra in the entire stretch starting from the Saraighat Bridge upto Chandrapur can help convert the same into a utility space for parking, food courts, book shops, performing arts, exhibits, gardens, fountains, architectural landscapes and everything that imagination permits. Similarly the entire Northern bank opposite Guwahati can be reclaimed up to about 150 metres into the river and developed into a tourist destination.

2. The North Frontier Railway colonies at both Maligaon and Bamunimaidan  that house a few dozen residential houses and quarters require redesigning. All the existing structures should be pulled down In their places a few 10-12 storied modern housing complexes can be brought up and the entire resultant vacant space converted into green belts, open places, play grounds and parks. The same can be done to the Guwahati University campus, Jalukbari, and Veterinary college campus at Khanapara. Similarly, keeping one original Assam type hostel as a symbol, all other hostels of the Cotton college can be dismantled and multi-storied hostels built and the remaining spaces left as open scapes.

3. In no civilized places are the drains kept open. Covered drains are a symbol of existence of engineering and technology oriented mindset of the people of the place. Public places should be beautiful, neat, tidy and clean. All the drains of the city need to be covered up. Drains under footpaths do exist but a lot more needs to be done.

4. There are thousands of multi storied residential and commercial buildings in the city. In every such complex all forms of waste matter (food, paper, plastic, polythene, sacks, wood, glass, metals, sanitary napkins and the like) generated by its dwellers are thrown onto the roads in the mornings which pose as a serious health hazard for the public. Since these are identifiable and concentrated places of generation of waste, waste segregation at the source itself is very much feasible. Once this is done, then subsequent management of the waste becomes easy. 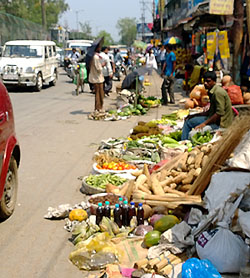 5. Although there are a few designated market places, the whole city practically looks like a marketplace- there are shops on all the roads, lanes and bye lanes. Vegetable, fish, meat vendors and tea stalls sell their commodities at all these conceivable places, leave the waste of fish scales, chicken feathers, intestines, blood...and practically what not there itself on the roads for the dogs and crows to feast upon and to rot there to become breeding places for mosquitoes, flies and germs. No municipality personal can clean waste and garbage matter if left strewn on the roads. The government must immediately put an end to these with an iron hand and build wide multi-storied market places– at least one for one locality. Very stern steps need to be taken to evict all the vegetable or other vendors from the foot paths.

6. Our people do not know how to walk, bicycle, and drive on and cross the roads. Extreme selfishness of character of our people is vividly evident at all places at all times. So many of the city roads need to be made one way and under-passages need to be constructed at many places for convenience of everybody.

7. It is difficult to understand whose fertile brain led to construction of abnormally elevated foot paths in the city. These should be flattened, the drains by the sides be covered and the space be used as parking lots. The entire stretch of the River Bharalu need to be covered and used as parking place. Road side parking should be totally prohibited. Halting bays need to be constructed for city buses even if that leads to acquiring personal land at any cost. City bus drivers responsible for traffic snarls need to be dealt with very sternly. For instance for first offense a mark on the driving license, for the second offense a fine and another mark on the driving license and for the third offense suspension of the driving license for 5 years, suspension of the bus permit for 5 years along with a hefty fine.

8. The British did not choose Guwahati as the capital of Assam mainly because it is an earthen bowl only with hills on the sides. Water is supposed to accumulate at the foothills. From this bowl the excess water spills over to the Deepor Beel. Now the people have earth-filled all the low lying areas including all the natural reservoirs.  The consequence need not be elaborated. It is for everyone to see. The government must adopt a strategy of saving the existing natural water reservoirs (if necessary buy private land owned or under possession) as well as evict settlers in government land in the hills. No mercy should be shown to anybody because individual agony or personal tragedy can not outweigh collective or societal agony.

9. The Brahmaputra waterway also needs to be utilized for mass transport. There is no point in subjecting a man to the ordeals of a cumbersome and time consuming bus journey all the way from Jalukbari to Noonmati. Instead he or she can easily take a comfortable ferry ride in half the time.

10. The number of public toilets is very small compared to the size of the city population. At least 200 paid public toilets are an urgent necessity.

The Assamese by nature are not competent people to manage a problem of such a gigantic dimension. International experts must be sought to prepare the master plan and non Assamese officers (not Bengalees either) inducted to man the relevant posts and execute the plan. The Assamese has a tendency to defy and disobey its own people in authority. With the kind of police and personnel manning the concerned offices and functional areas now, no improvement can take place. The whole bunch of them needs to be overhauled, sent outside to appropriate places to learn and train.

This is a nice article except

Permalink Submitted by Sanjiv Paul on Mon, 01/02/2016 - 17:39
This is a nice article except "not Bengalees either". What do you really mean by not Bengalees either? The assamese are fools & lazy people but we bengalis are not like that. They infact call themself kharkhuwa and love the fact that they are incapable of doing any kind of task successfully.

22 Mar 2014 - 9:45am | Dibya J Borthakur
Two youths were killed when their motorcycle hit a stranded truck near Raha on Saturday.The tragic incident took place in the wee hours at Bagariguri when the duo, identified as Khalil Ali and...

No respite from monsoon misery

17 Jul 2016 - 5:53pm | AT News
The monsoon woes refuse to die out on Sunday when incessant rains resulted in the swallowing water levels of the Brahmaputra and its tributaries. The surging waters have been wreaking havoc in 15...