Four persons lost their lives in shocking electrocution in Guwahati when the city was reeling in rainwaters on Friday.

The first shocking death took place in Rajgarh area where an aged person was killed in electrocution.

The second incident was further shocking where two persons died in Dwarokanagar near in the afternoon.

Apart from these three incidents of electrocution, yet another person met watery grave on Friday.

He was believed to have been washed away by the Bharalu river which is flowing dangerously following the incessant rains during the last couple of days.

27 Nov 2017 - 12:16pm | AT News
GUWAHATI: Even an escalating protest across the state can't halt the massive eviction drive if Pramila Rami Brahma is to be believed. Talking to reporters in Guwahati on Monday the forest...

22 Sep 2016 - 9:26pm | AT News
The city based Dispur Hospitals plan to observe the World Heart Day on 29 September with various programs. The popular private hospital of northeast India decides to take out a walkathon on Thursday... 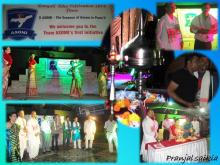 26 May 2014 - 5:26pm | Pranjal Saikia
Assamese people residing in Pune witnessed a wonderful evening on 24th May 2014, with the celebration of Rongali Bihu at the beautiful and natural environment of Bombay Sappers. It was organized...