STRAIGHT FROM THE ASSAEMBLY: All About the liquor business

The day two of the Assam Assembly's Budget session began with a rocause as soon as it began. As the House started its proceedings, Palashbari independent legislator Pranab Kalita wanted to know if the Government can stop the liquor shops. In his reply, excise minister Gautom Roy informed the House that the it is impossible for the Government to stop the liquor shops saying the Government earns a good amount of revenue to the tune of R. 300 crore a year with these business. This has created a fresh controversy in the House. Meanwhile, the main Opposition is ready to bring an adjournment motion at any time citing the Government's failure on all fronts.

17 Dec 2013 - 9:51am | Bg Gogoi
The Himalayan Climate Change Adaptation Programme (HICAP) is a pioneering collaboration among three organizations – CICERO, ICIMOD, and GRID-Arendal– aimed at contributing to enhanced resilience of... 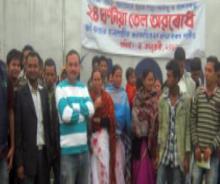 10 Jan 2012 - 6:29pm | Anup Arandhara
The 24 hours ONGC and Oil blocked, called by All Tai Ahom Student Union from January 9, 5 am completed. few minor incident reported during the blockage. The Organisation called the blocked...

11 Jun 2017 - 7:19pm | AT Staff Reporter
Udalguri district administration organized "Sabka Saath Sabka Vikash Sammelan" in the district on June 10 with day long programme.The programme was held at the Parade Ground of the campus of Deputy...