All India Regional Rural Bank Employees Association (AIRRBEA) has opposed the entry of foreign and private banks in rural areas. Criticizing the announcement of Union Finance Minister, P. Chidambaram, in his recent budget speech in the Parliament, the AIRRBEA general secretary Dilip Kumar Mukherjee said that his organization did not agree on minister's proposal as this attempt would 'take away' the basic fabric of the agricultural character of the country and make the entire 'Green field' into 'Gray field'. He was addressing the media persons recently at Guwahati Press Club.

The AIRRBEA representing majority of the officers and employees of the country strongly opposed the move of Government of India, since such attempt would take away the basic fabric of the agricultural character of the country.

Mr. Mukherjee added that 92 RRBs have covered 572 rural districts of the country out of 622. These banks have the largest network with 15,000 rural branches. Dr C Rangarajan, Principal Economic Adviser to the Prime Minister has appreciated the functioning of RRBs saying that both deposits and credit data indicate that RRB branches in rural areas have performed better in relation to other scheduled commercial bank branches. This is significant from the point of view of financial inclusion as rural branches are closer and more active in extending outreach to remote and interior villages. From this angle, the RRBs are particularly well placed to achieve the goal of financial inclusion.

The RRBs feel that private banks would be free to setup any number of branches in any rural area in the name of agricultural banking and can take over any bank. Such corporate giants would be free to take entire rural deposits and dump it for their own corporate goal at the metropolitan centers just after distributing some agricultural loans to agro-based industries or to corporate farming leaving aside the small and marginal farmers for the rural and cooperative banks.

The AIRRBEA has suggested that rural banks be allowed to open 'link branch' at each and every block headquarters in the country to have a direct liaison with each block panchayat samiti and/or block development officer for effective implementation of all central government/state government programmes for the financial/social improvement related schemes with or without bank credit through or directly self-help groups. This will cause minimum expenditure compared to maximum social service to the entire 'excluded families.'

The AIRRBEA has demanded formation of National Rural Bank of India having state level RRBs under it. It also demanded parity of pension benefit as per settlement in 1993-94, parity of other allowances and benefits, proper man power planning-promotion and recruitment against outsourcing of jobs, compassionate appointment as per scheme 1982, negotiating forum and representation of workers in the Board of Management of RRB. The Association has chalked out various action programmes for fulfillment and implementation of its various demand.

Permalink Submitted by gyanchand on Sat, 13/12/2008 - 11:26
system needs complete revamping and the outside private ones may be hurdlesome for us.

More Twists in the Coachs Story

6 Jun 2007 - 5:30am | editor
The BCCI should fomally adopt surprises as a key objective now. BCCI has roped in two new contestants into the fray from absolutely nowhere, John Emburey,former English Cricketer and Graham Ford,... 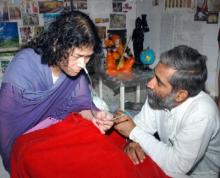