Union minister of state for home Kiren Rijiju gives hint of sufficient fund for to help the state get rid of flood fury and the aftermath. After his survey in Goalpara on Saturday, Rijiju told reporters that the Centre has no dearth of funds and support to tackle the flood menace. “Let me assure that there will be no dearth of central funds and support to tackle the situation,” Rijiju told reporters in Goalpara. Accompanied by Guwahati MP Bijoya Chakravarty, the Union minister flew over Goalpara, Dhubri and Kamrup districts along with North Garo Hills and South Garo Hills districts of Meghalaya. 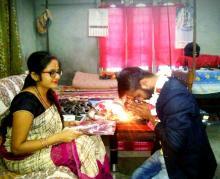 21 Oct 2017 - 11:41pm | Shajid Khan
The Gorkha community in Assam celebrated Bhai-Tika or Bhai-Dooj to mark love bonding between brothers and sisters with traditional fervour and gaiety on Saturday. Bhai tika is the last, and the most...

Assam by poll on Sept 13

16 Aug 2014 - 4:33pm | AT News
The Election Commission has announced the schedule of the by polls in Janunamukh, Silchar and Lakhipur. The last date for filing nominations in the three assembly constituencies is August 27....