Jorhat police have yet to arrest the miscreant 24 hours after he shot dead school teacher near Toklai on Monday. But preliminary investigation suggests no hands of militant in the sensational shoot out where the headmaster of Namuna Bagan lower primary school Dijendra Nath Gogoi was killed.

Gogoi had an extra-marital affair with a local woman and his wife told Assam Times that he had not visited the family for the last one month. Moreover, he had a quarrel with his son which reached police station last month. Both the father and son lodged FIRs against each other.

The incident took place at 9-30 in the morning after he arrived in the school at Namuna tea estate under the Tocklai Tea Research Centre. A youth came to meet him and after brief conversation both they came out of the school office.

Then suddenly the youth took up his arm and shot Gogoi dead from a point blank range. A student who turned up to the school fled from the spot. The local residents who found the lifeless teacher in the blood pool took him to the Jorhat Medical College Hospital where he was declared brought dead. 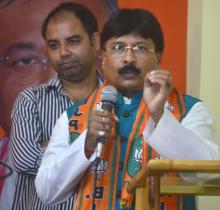 7 Jun 2015 - 7:53pm | AT Political Bureau
Dark clouds are hovering over the regionalism in Assam politics when one after another AGP leaders are joining BJP. That too hardly a year before the assembly polls.Yet another AGP leader joined the...

7 Mar 2019 - 11:39am | AT Kokrajhar Bureau
Kokrajhar: Media fraternities from different media houses across the district of Kokrajhar have participated on a workshop  held at Bodoland Guest House conference hall in Kokrajhar on Wednesday...

Over 50 injured in Tezpur group clash

10 Mar 2012 - 3:28am | editor
Tension prevails in Tezpur when fifty people have been injured in a group clash on Friday.The took place at around 4 in the evening when a group of youths clashed with some local residents at...