Another book on NE released

The book ‘Kéérook and Other Stories from North East India’is a collection of ten fictional short stories based on lives and livelihoods of the people living in the region and written by Group Captain Mohonto Panging was released by retired air marshal Anjan Kumar Gogoi at a recent function in Guwahati.

The stories narrate tales about the unique way of life, customs and traditions of people habitating an area with similar terrain, weather, flora and fauna called North East India. Three stories Indi-Chini Bhai Bhai, Odyssey to Thoubal and Exodus to the North East are based on recent geo-political events related to people from North East India vis-à-vis mainland India. These are of special relevance due to the increase in anti-north east racial incidents in few mainland cities. The stories in the book go a long way in helping understanding the ethos of North East India. A ‘Should Read’ for a fine perspective on North East India. 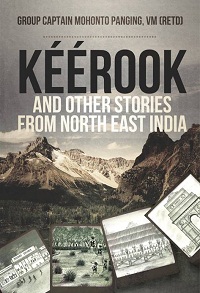 Group Captain Mohonto Panging hails from Pasighat in Arunachal Pradesh and is a retired Fighter Pilot. Having flown over 3300 Hours on various frontline fighter aircraft like Sukhoi-30MKI, Jaguar, Hunter, Mig-29, Sea Harrier etc he has the distinction of being the only person from North East India to Command a Sukhoi-30MKI Squadron. He has also been decorated with the Presidential Award – the Vayu Sena Medal. He is a post graduate and is widely travelled, attending various courses in India and abroad.

The book release function was attended by many dignitaries. The dignitaries included Mr Subhash Das IAS, Additional Chief Secretary, Govt of Assam, many retired officers from the defence services and others. This book has been published by Notion Press and can be ordered through Flipkart.com, Amazon.com.

Ranjan, thanks for the write

US team in search of NE war martyr