Hurdle in ST status for 6 communities

The move for ST status to six communities is set to hit a major road block with a circle of tribal organization leaders deciding to oppose it tooth and nail.

The Kokrajhar unit of the All Assam Tribal Sangha threatens to openly oppose the move saying that they won’t sit idle if the government endorses the demand.

The issue came up for discussion when the new executive body of the Kokrajhar unit of the organization met at the Serfanguri High School ground on Sunday.

The decision to oppose the ST status to 6 communities was taken during the 3rd triennial conference of Kokrajhar district unit of the Sangha held at Serfanguri High School ground on Sunday.

19 Jun 2017 - 12:36am | AT News Imphal
The 16th Great June Uprising, Unity Day was observed here on Sunday where thousands of people offered floral tributes to the 18 “martyrs” who laid down their lives to protect the... 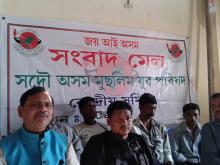 25 Nov 2014 - 7:14am | SK Hasan
Thousands of Muslim people burnt the effigy of Dr Subramaniam Swamy in Nazira on Tuesday three days after the BJP veteran asked the immigrants to covert to Hinduism to get Indian citizenship....