The Centre has a scheme worth Rs 96,59,00,000 for conservation and development of altogether 135 sattra in Assam, mostly, in Majuli.

Disclosing this, Union minister for tourism informed the Rajya Sabha on Tuesday that the Centre has received a detailed project proposal for conservation and development of 135 sattra was received from the Assam Government.

She also said these institutions have been identified in the Ist Phase of the Scheme for their development adding that the project proposal has been forwarded to Planning Commission for its consideration.

The ministry of culture has suggested constitution of an Expert Group consisting of eminent members from various fields such as Archeology, Anthropology, Performing Art, etc. for the purpose. 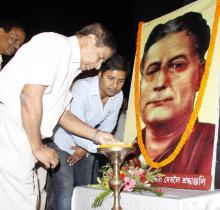 14 Oct 2014 - 8:28am | AT News
A two day long political convention gets underway in Guwahati on Tuesday is expected to refurbish the image of the Asom Gana Parishad which faced defeats in the last couple of Lok Sabha and Assembly...

4 Apr 2011 - 10:59pm | editor
Female voters queuing up for cast their vote with great enthusiasm in a polling center during a first phase Assam Assembly election at Boithalangsu in Karbi Anglong on 04-04-11. PHOTO: UB PHOTOS

2 Aug 2012 - 10:16pm | editor
Do you feel strongly about the environment and the issues that affect it? Do you enjoy getting behind the camera to make films? Do you want to be in with a chance of winning $1500? If you answered...