Kokrajhar district administration presented Anundoram Borooah award, 2014 to the first division and distinction holder students in HSLC examination (2014) at a function held at Basic Training Centre on Wednesday in Kokrajhar.

Each student was given away Laptop and certificate on the occasion in the presence parent and officials.

2 Apr 2011 - 11:21pm | pallavibarua
Radhika Tanwar (20) is shot dead in Delhi. We see the perpetrator of the murder in the newspapers. We see protest marches brought out for the safety of women and girls. Any rape, any murder in the...

29 Apr 2015 - 9:33am | Sanjib Kumar Borkakoti
A UGC sponsored national seminar on 'Srimanta Sankaradeva as an Innovator' will be held on August 21-22, 2015. The seminar is being organized with the aim of highlighting the innovative works of... 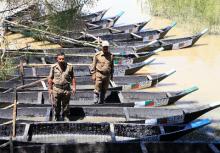 14 Jul 2013 - 10:34pm | Subhamoy Bhattacharjee
The International Fund for Animal Welfare - Wildlife Trust of India (IFAW-WTI) has provided 35 boats to the Kaziranga National Park authorities to assist in anti-poaching patrolling in...