The Supreme Court on Wednesday slammed both Delhi and Dispur for failing to stop influx from across the Indo-Bangla border. The apex court further appointed an officer to physically verify the border fencing works.

Then the duo asked senior advocate Upamanyu Hazarika to physically verify the fencing and security across the Indo-Bangla border running through Assam and file a final report by June 30. The home ministry will have to pay Rs 5 lakh to Hazarika for this purpose.

The court had also asked the MHA to file an affidavit indicating steps taken by it on border fencing, construction of border roads, night patrolling, flood-lights, scheme for deportation in consultation with the Bangladesh in terms of its December 17 order.

15 Dec 2008 - 3:43am | editor
CPM general secretary Prakash Karat says the country needs a third front for a better future. Addressing a mammoth rally in Guwahati on Sunday the partyÃ¢â‚¬â„¢s he said need of the hour is a...

Din on the floor of Patnaik report

16 Jul 2010 - 6:53pm | editor
The Assam Assembly witnessed uproar on Fridat as the Oppositin raised the multicrore scam in Dima Hasao a day after governor JB Patnaik sent his report to the Centre. On the other hand, health... 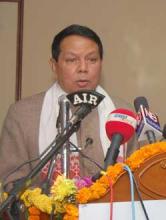 Freedom of media is art of democracy: Dasmunsi

22 Jan 2008 - 3:45pm | editor
Union minister for information and broadcasting Priya Ranjan Dasmunshi on Tuesday said the freedom of media is an art of democracy but he cautioned the media tribe against any attempts to sell...