The Kamatapur Liberation Organization has made it plain and simple that Jiban Singha is still alive three days after the army claimed to have killed the outfit’s chairman at a sytrike in Myanmar.
KLO told a section of media on Saturday night that Jivan is keeping fine and that army have been spreading lies to confuse the people.
KLO made its position clear hours after ULFA confirmed that the KLO chief was not dead as it wa claimed by army.
Notably, army on Friday claimed to have killed the KLO chief at a strike inside the soil of Myanmar along with several other insurgent leaders. 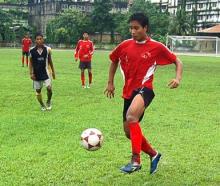 12 May 2014 - 8:37pm | AT News
No major setback awaits Congress in the Lok Sabha polls if the exit polls are any indication.CSDS-sponsored exit poll has projected 40% vote share for the ruling party 1% up from 2009 Lok sabha polls...

10 Oct 2008 - 2:11pm | editor
The Assam government has ordered a judicial probe into the ethnic violence in Darrang and Udalguri districts that has claimed 62 lives even as normalcy is back to these areas.During his visit on...