The NDFB-Sannounced newly formed National Council that held on April 14 and 15,2015 in the general Assembly of the outfit with B Saoraigwra as president and BR Ferrenga as general secretary along with other 17 council members. 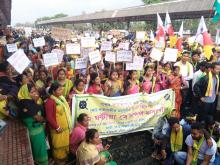 13 Jul 2015 - 10:10am | AT News
Chief minister Tarun Gogoi is on a visit to New Delhi on Monday.Sources confirmed that during his two days visit to the capital, the chief minister is scheduled to attend Sonia Gandhi’s Iftar party...

Seminar on Contribution of Gorkhas for development in North East/India

13 Aug 2008 - 2:55am | Nanda Kirati Dewan
"Nation needs to identify Gorkhas as Indian" - this was the opinion by Manash Choudhury, Minister of Technical and Higher Education, Govt. of Meghalaya while releasing a book titled 'The...