Letters to Modi for separate state for Bodos

The All Bodo Students Union ( ABSU) has again reiterated it's demand of creation of separate Bodoland state curving of Assam and in a significant symbolic step of demands despatch mass letters to Prime Minister Narendra Modi seeking early creation of Bodoland state through Post Office today in Kokrajhar.

The Absu claimed that over 3 lakhs of mass letters are despatch to the PM from various districts of the state including Kokrajhar seeking district has 50 thousand letters on support demand early creation of Bodoland state through political dialogue involving home minister of India in the ensuing parliamentary session and held permanent peace and integration.

Lawrence Islary, general secretary of the Absu reiterates that the students union and common peoples of the state demanding early solution of long standing demand of Bodoland state. He has expressed his hopeful that PM Modi will look after the letters that are being despatch on the issue of Bodoland state as he is supervision all letters sent from various parts of the country.

Former MP Brahma has urged the PM Modi and centre to take bold step to create separate Bodoland state in the state. He said that mass letter sending is a medium of seeking democratic rights in the country.

Peoples from all walks of life including college student, social organisation leader, Absu leaders despatch letters to the PM Modi in huge gathering in Kokrajhar.

Mentioned be made that Absu had submitted first mass letters to PM of India Dr Manmohan Singh, the then USA govt in 2010 seeking early creation of separate Bodoland state in Assam. 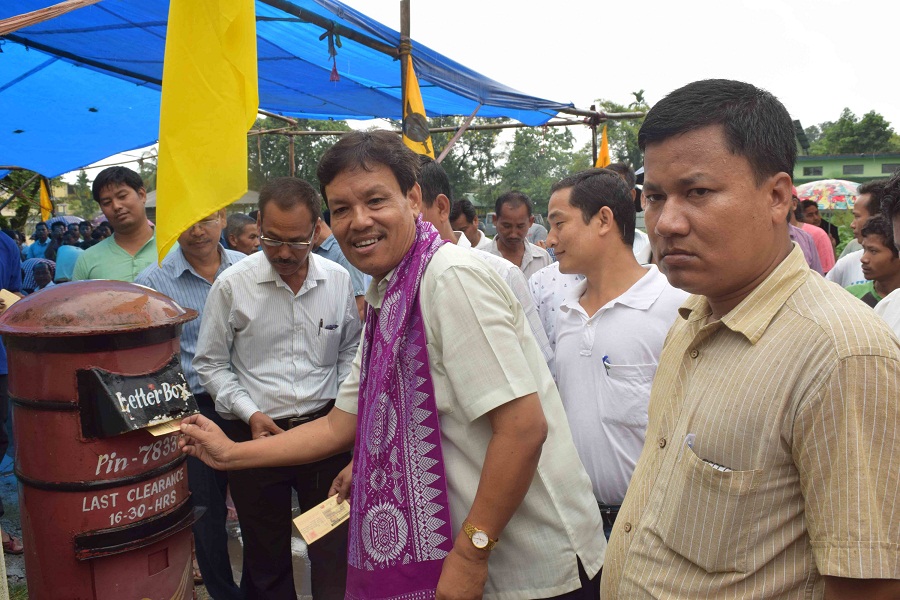 18 Jul 2016 - 12:49pm | AT News
Amid a seismic wave of protests over the move to auction the marginal oilfields, the Asom Jatiyatabadi Yuva Chatra Parishad has made a startling revelation that could put the Sarbananda Sonowal...

5 Aug 2016 - 10:13pm | AT Kokrajhar Bureau
At least 14 peoples including a militant cadres killed and 16 others received serious injury into indiscriminately fired by NDFB-S militant today at Tinali market in Kokrajhar district. According to...