The all party meeting in Shillong on Wednesday unanimously finalized the move with the hope that it would go a long way to resolve the decade old problem.

A senior political leader who attended the meeting told Assam Times in Shillong that the entity will have representatives from all political parties and independent legislators.

All political parties would send the names of their representatives to be inducted in the entity which is expected to be functional during the next couple of days. 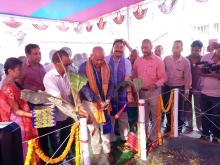 18 Apr 2017 - 9:22pm | AT Kokrajhar Bureau
As many as 21 foundation stones were lay by BTC chief Hagrama Mohilary at different places on Tuesday itself in the presence of official and publics in Dhubri and Kokrajhar districts to pave way more...

In deep grip of Christmas festivity

24 Dec 2017 - 11:09am | AT News
GUWAHATI: Christmas festivity grips the Assam with brisk preparation a couple of hours before the evening in the nook and corner of the north eastern state. Churches across the state are getting...

22 Oct 2011 - 9:49pm | Pankaj Sharma
In a very disheartening and tragic incident one Chinmoy Bora dumped his own mother near NH 37 at Nagaon to get hold of the family’s wealth.It is said that a person can never repay one’s...