The Kokrajhar railway station platform turned into a pit on Tuesday morning hours after a heavy downpour lashed the entire BTAD district.

Waiting seats were caught mud and filth. Floors got drenched with dirty waters giving the passengers on wait a harrowing time either to keep standing or sitting.

They blamed it all on the staff for allowing the platform to be caught in mud and filth.

"The is unacceptable. Railway does not run this way. Nobody is there to share this condition," said a passenger who was waiting for a train.

Another passenger who refused to be named said," I do blame the staff in Kokrajhar. Why they can't keep talking to the authority on this condition."
Other passengers urged the station authority to repair and renovate the platform.

14 Dec 2011 - 12:25am | Dibya J Borthakur
The newly constructed Nagaon district fishery office nearby the Nagaon district police reserve was formally inaugurated on December 12 by the Minister of Fishery, Basanta Das at a function wherein Dr...

No trouble for Gogoi govt: Brahma

2 Sep 2015 - 9:25am | Hantigiri Narzary
Former minister and BPF leader Pramila Rani Brahma has claimed that ruling Congress government in the state has nothing to be worried at all. Talking to reporters in the sidelines of a function... 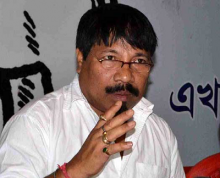 11 Sep 2015 - 9:49am | AT News
The Opposition Asom Gana Parishad is contemplating to move Supreme Court challenging the Centre’s Indian citizenship for the non Muslim Bangladeshi and Pakistani immigrants. Talking to Assam Times...