The Bodo Sabha Sabha along with various organisations recalled the contributions of former president of Bodo Sahitya Sabha “Subungthini Thandwi”- late Bineswar Brahma  towards Bodo literary on his 15th death anniversary on Wednesday at his burial place Chandamari in Kokrajhar.
Organized under the aegis of Bodo Sahitya Sabha(BSS) with Bineswar Brahma Charitable Trust, the function evoked an encouraging response.

Sahitya Sabha president Dr Kameswar Brahma  hoisted the organizational flag in the morning followed by paying homage to the tomb of Bineswar Brahma paid by elder sister of the deceased, Thuntri Brahma.

Dr Brahma called late Bineswar Brahma was an extraordinary leader of the sabha as well of Bodo community.
“Brahma dreamt to forming a strong Bodo nation in the world but his mission and vision could not successful due to untimely demise in 2000”,  Brahma said.

19 Oct 2015 - 5:10pm | Hantigiri Narzary
Leaders from all political parties along with the various organizations have greeted the people of all walks of life on the occasion of Durga puja which gets underway on Monday. BTC executive... 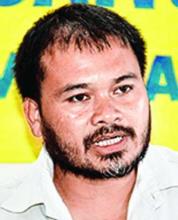 Will Akhil get bail in Dudhnoi?

24 Dec 2017 - 10:51am | AT News
DUDHNOI: A day after getting Akhil Gogoi in their custody, the Dudhnoi police is producing the KMSS leader before a local court on Sunday. KMSS leaders and workers who are gathering in large number...

15 Sep 2013 - 9:51pm | Abdul Gani
Bhojkuchi High School, Nalbari is going to celebrate its Silver Jubilee next year with a three-day programme. The school which was established in the year of 1982 before getting the provincialisation...