Assam second in offence against state

Meghalaya has recorded 32 such cases. Arunachal Pradesh, Nagaland, Sikkim did not record a single offence against the State in 2014. 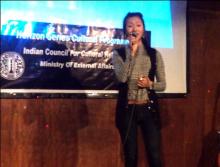 10 Jan 2012 - 3:54pm | editor
The Indian Council For Cultural Relations, Ministry of External Affairs, Government of India in collaboration with Robust Network, Dimapur organised a grand Cultural Show on January 8 from 5.30 pm at...

17 Oct 2015 - 8:01am | AT News Dimapur
Amid the confabulation of the Naga peace move, NSCN (K) has asked a section of ministers and MLAs to refrain from forcing them to toe the line of a particular political party. In a recent...

18 Feb 2008 - 4:09am | editor
The Assam BJP has demanded a specific set of policy from the Government on conversion saying it is mother of all social tension in the state. Addressing a press conference on Sunday in the city,...