DoNER minister Dr Jitendra Prasad Singh said on Tuesday said that BJP is the only mainstream political party having internal democracy. Talking to reporters on Dr Himanta Biswa Sarma’s move to join BJP, Dr. Singh BJP is not controlled by any family or dynasty which proved that all people being suffocated on account of this, for them BJP was the only option. 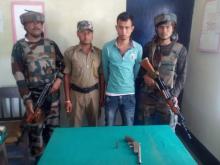 20 Dec 2007 - 2:50am | editor
The All Assam Tai Ahome Students Union has called for social boycott of those people who attended the meeting with P R Kyindiah on Tuesday in New Delhi.Talking to a private TV channel on Wednesday,...
Follow @Assam Times