Marking the World Environment Day, the Assam Chief Minister Tarun Gogoi today announced that the highly endangered river dolphin, locally known as the "Xihu" would now be the State Aquatic Animal. Earlier today Shri Rokibul Hussain, Minister for Forest flagged off a colorful march of about 300 children dressed in caps and T- shirts through the heart of Guwahati, calling for dolphin protection. They were taking part in a two day Children's Summit organized by the Centre for North East Studies and Policy Research(C-NES) to focus attention on the threat to the river dolphin, a fresh water mammal with a population of over 260 in Assam. There are just about 2000 river dolphins in South Asia due to their getting entangled in gill nets and frequent poaching.

The first ever such Summit saw a unique and uniform interaction between the Chief minister and the students at an hour long programme where the young boys and girls grilled the political leader on issues as varied as global warming, cutting of trees for highway construction and waste management. Shri Gogoi said that he was impressed with the growing environmental consciousness among the youth and said they could teach the older generation. The Summit included painting, essay and quiz contests: The winners were Priyasa Kundu, Suriya Khalid and Simanta Kalita, first, second and third respectively,from the BRPL Vidhalaya, Dhaligaon and the consdolation prizes going to Manjima Sarkar, Namrup and Himakshi Talukdar, Sankardev Jatiya Vidyalaya, Kukurmara in GroupA ( classes 5-7) and Mintu Moran, Jatiya Vidhalaya, Kakopathar, Partha Pratim Nath Jatiya V idyalaya

"The Governments decision will strengthen efforts not just to protect the dolphin but also to develop public awareness on the need to protect wildlife," said Sanjoy Hazarika, Managing Trustee of the C-NES, which has led a sustained campaign to get official recognition for the dolphin, as part of its effort to connect field realities to government policies.

23 May 2012 - 5:29pm | editor
Sudden attack by swarms of venomous spiders strikes panic among the people of Dibrugarh and Tinsukia districts during the last couple of days. One person died and several others were injured after...

11 Nov 2014 - 8:19pm | Mubina Akhtar
The Great One Horned Rhinoceros is one of the rare and precious wildlife in the world and a state symbol of Assam. The poaching of this heritage species in the recent years in record numbers in its... 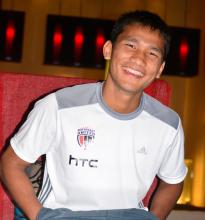 14 Nov 2014 - 8:59pm | Anamika Dutta
Seminlen Doungel is shining in the field of Indian football. Courtesy Indian Supper League. Born on 3 January 1994, Doungel is a footballer who plays for North East United in the Indian Super League...