The All Bodo Students Union ( ABSU) and Arunachal Youth Organisation ( AYO) will work jointly for peaceful co-existence in the north eastern region.

A five member delegation led by ABSU General Secretary Lawrence Islary attended the session with Giogi Talar, president and Making Taxing, general secretary of organization. They discussed and resolved jointly to extend all possible help to ABSU to the cause of realizing Bodoland with all possible democratic means only.

Respecting ABSU sentiments on the issue of Bodoland, the Arunachal Youth Organisation will raise the issue with Union minister of state for home Kiren Rijiju at the earliest and extend out support by submitting a memorandum. 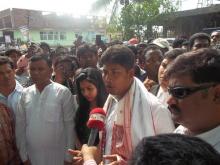 21 Jun 2012 - 2:08pm | editor
A number of Naga organizations have asked KPLT for to release two Naga workers who were taken hostage along with several others from Karbi Anglong district on June 10. In a statement, the Naga...