Roads and bridges in West Siang district in Arunachal Pradesh are getting a facelift. The construction work of Concrete Cement Pavement road from Paktu Tinali to Pakam village is going on smoothly and roads are being constantly monitored personally by Dukjum Lona. The project is likely to be completed during this winter.

19 Apr 2012 - 11:48pm | editor
Chief justice with Punjab and Haryana high court Ranjan Gogoi is set to be sworn in as Supreme Court Judge on Friday. The high court has already received warrants regarding elevation of justice... 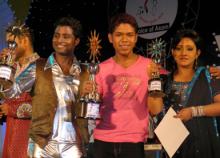 Palash is Voice of Axom

2 Feb 2008 - 4:48am | editor
A major fire broke out in the Paltanbazar area in the city on Friday midnight which damaged properties worth crores of rupees. The accident took place while a loaded truck hit an electric post which...