Irrespective of caste, creed and language thronged the observation. The students union has been organising the international non violence day since 2007 and was working for the social integration among all sections of community in the state, said Lawrence Islary, general secretary ABSU. 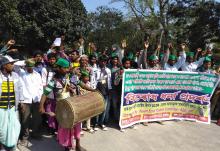 2 Jan 2016 - 12:08pm | Hantigiri Narzary
A surrendered NDFB was killed and another received seriously injured in a clash among the group at the outfit’s camp at Sudempuri in Kokrajhar town this evening. Police said Darendra Basumatary, who...

How stable is the Meghalya Government?

20 Apr 2008 - 11:46pm | Rupak Das
Meghalaya went to polls on March 3 this year with a total of 331 candidates belonging to 13 political parties and 73 independent candidates in the fray for elections to the 60-member state assembly....