The NDFB(P) is quite unhappy with the slow pace of peace process even seven years after the outfit struck a deal with the government. The pro talk militant outfit is further worried over the stepped up activities by NDFB-S, KLO and Jehadis.

The NDFB-P made the observations when they celebrated the outfit’s 29th foundation day centrally at Serfanguri designated camp in Kokrajhar on Saturday. NDFB president Dhiren Boro hoisted the flag in presence of the central leaders and took guard of honour from his cadres.

General secretary Govindo Basumatary said that the outfit took up arms for the cause of Bodo nation on this day in 1986 and struck ceasefire deal with the government in 2005 for the solution of Bodoland issues. He told that peace talk is going on and yet the government has not been sincere to solve the issue. He slammed the NDA government at the Centre for failing to implement their poll promises.

DHD chairman Dilip Nunisa, who attended the programme said that the government has done precious little to solve the problem of militancy. BTC MCLAs Jyotirindra Brahma, Jiran Basumatary and leaders from various organizations attended the function.

10 Oct 2011 - 8:52pm | editor
Four persons died and at least 20 others have been injured when security forces sprang upon a group of jute cultivators on Monday when they were blocking the national highway in Darrang district...

9 Aug 2017 - 8:37am | AT Staff Reporter
Good news for the peasant fraternity.  Over 45,000 farmers across the State have been covered under the Pradhan Mantri Fasal Bima Yojana (PMFBY) for the Kharif-2017 season. Among those who... 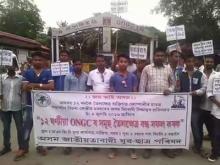 4 Jul 2016 - 12:29pm | AT News
Hundreds of AJYCP activists in Sivasagar district launched day long strike in protest against the move to auction 12 oil fields. The agitating activists thronged the oil fields where they warned the...