Arunachal BJP hits back at Cong

Amid Congress-BJP blamegame over the refugee issue BJP has accused the ruling party of resorting to partisan politics. In a statement, BJP said they the Congress leadership should apprise the state Congress men of the historical truths behind the issue.

According to BJP, the blunder was made by Nehru by accepting the Buddhist majority Chittagong Hill Tracks to be part of Bangladesh which was created for Muslims. “The religious persecution by Muslim fundamentalists forced the Chakmas and Hajongs to migrate to India. Then they were allowed to settle in NEFA

(now Arunachal Pradesh). In 1972 Indira Gandhi entered into an agreement with Sheikh Mujibur Rehman the then Prime Minister of Bangladesh and decided to grant citizenship under Sec. 5(i)a ofcitizenship act,” said the party. BJP observed that the Congress has again got wrong facts as there was Congress government at Centre when on 9th January, 1996 a major judgement was delivered by Supreme Court directing that the application for citizenship for Chakmas and Hajongs should be looked into and provide full protection to Chakmas and Hajongs by State and Centre. 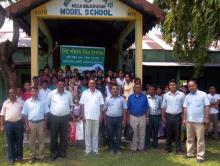 Celebration of World Environment Day by KVK, Nagaon at Missa

6 Jun 2011 - 2:32pm | AT News
Under the theme “Forest: Nature at Your Service”, this year’s World Environment Day was celebrated by the Krishi Vigyan Kendra(KVK), Nagaon with a day-long programme in the premises...

23 Mar 2017 - 9:33pm | SK Hasan
Freedom fighter, trade union leader and social worker of Nazira Benu Bhuyan breath his last at his own residence on last March 20. He was 85 and survived by his wife and son. Nazira MLA Debobrate...