One more extornist arrested by police who was involved with extortion demand from a contractor of NTPC under Salakati police outpost in Kokrajhar late last night. Four persons were rushed to Harigaon yesterday to receive demand money in the name of NDFB-S where one Govindo Barman was red handed arrested, and on his revealed another involved person was arrested last night and two others are absconding. The arrested was identifiec as Biplob Debnath while absconding are identified as Krishna Debnath and Utpal Pandit. Police has been stepping to arrest the culprits who were involved with extortion served to common publics in the area, said a police officer. 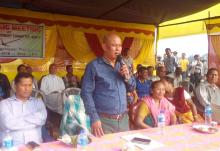 BPF gears up for assembly poll

16 Feb 2016 - 11:59pm | Hantigiri Narzary
The Bodoland Peoples Front(BPF) party has geared up for the upcoming assembly election holding of public meeting in the Bodoland region as well across the state. BPF president Hagrama Mohilary,who...

17 May 2015 - 2:46pm | AT News
A huge public convention in Guwahati on Sunday warned the government of dire consequences if it retains anti people policies and resorts to dirty politics to spoil the real objective of an updated... 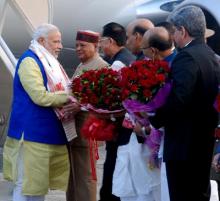 29 Nov 2014 - 6:33pm | AT News
Amid tight security prime minister Narendra Modi has arrived in Guwahati on a two days visit to the north eastern region on Saturday. Modi landed at the Lokpriya Gopinath Bordoloi...