The National Investigating Agency claimed to have arrested a dreaded NSCN(K) militant from Bangalore on Friday who is supposed to be the main culprit of the attack on Assam Rifles in Kohima early this year.

Identified as Atoshe Chopey, the Naga insurgent was captured during a joint raid of Bangalore Police at a lodge in the morning. After detaining and interrogating for a few hours, he was produced before a special court in the city.

According to NIA, Chopey hails from Zunheboto district of Nagaland and during preliminary interrogation, he has confessed his involvement in the incident. 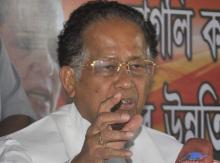 13 May 2011 - 6:11pm | Syed Miraz Ahmed
The vote count process which shall determine the future of Dispur and the shape of things to come in the next 5 years is fervently on. According to Times of India reportage Chief Minister Tarun Gogoi...