An LPG Cylinder of domestic use got burst  on Thursday night at the house of one Ibrahim Ali. Injuring 5 persons of the family  during the blast. The injured are being treated in Nagaon Civil Hospital. The blast occurred while the houselady was cooking. People sitting at the dining table got injured. Due to the intensity of the blast the brick wall of the kitchen got damaged.

5 Mar 2012 - 5:08pm | Syed Miraz Ahmed
Combing operations put into service jointly by the police, army and paramilitary forces have invariably failed to pinpoint the whereabouts of the abducted forest officials who on Saturday were... 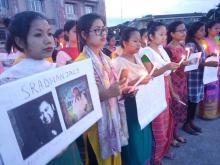 22 Sep 2014 - 5:34pm | AT News
Rainwaters continue to wreak havoc in Guwahati with more and more areas of the premier north eastern city coming under the waters on Monday. This has forced the authorities to order shut down of all...