28 Mar 2014 - 3:28pm | AT News
A section of Congress leaders seem to have targeted media in the poll campaigns these days.Sonari MLA Sarat Borkotoky on Friday accused a section of media of campaigning for BJP. In his address at a...

11 Jun 2014 - 4:22pm | AT News
Karbi Anglong police recovered a huge cache of arms and ammunition during a combing operation against UPLA inside a dense jungle on Wednesday. These include 6 AK-47 rifles, 21 grenades, a pistol... 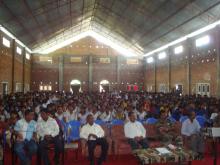