The Bodo Sahitya Sabha has emphasized of that Bodo language and medium should be development and growth in the line of other languages are developed.

The sabha discussed deep and thorough on the language development and uplifting of medium related on its ongoing 55th annual conference, which is gets underway at Birhangaon ground with two colorful programme scheduled from Friday in Chirang district.

On its first day programme,opening of main gate of the conference was held the morning followed opening of main pandal, delegate hall, dinning hall, volunteers camp.

Taburam Tiede, president of Missing Sahitya Sabha will grace as chief guest on the open session on Saturday with Dr Kameswar Brahma, president of the sabha in the chair.

BTC chief Hagrama Mohilary, former minister and MLA Chandan Brahma, Kampa Borgoyary would be attending as guests in the session.

Development of language and Bodo medium related issues are discussed in the delegate session, besides  resolved various of demands that are included creation of separate directorate, appointment of teachers in Bodo medium schools, supply of Bodo textbooks on time, informed Kamala Kanta Mushahary, general secretary of the sabha.

29 Dec 2015 - 9:52pm | Hantigiri Narzary
One NDFB-S militant identified as Majendra Narzary (41) was apprehanded from Khasiabari under Kokrajhar police station in the district today by a joint team of army and police . One postol along with... 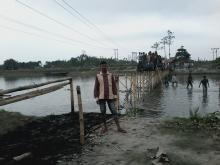 28 Apr 2016 - 9:20pm | AT Kokrajhar Bureau
Even though the government and district administrations never built any bridge to the welfare for the common publics of greater Chechpani area and failed to protect public property, unidentified...